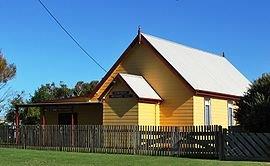 The pretty village of Narrawong is on the northern shore of Portland Bay and sits alongside the mouth of the Surry River. The foreshore is a popular spot for lazy Summer holidays, with angling for bream & salmon in the river and mulloway & snapper can be caught in the surf. The local boat ramp at the camping ground is a popular launching spot and the Narrawong beach is patrolled over the height of summer at various times.

Mt Clay State Forest overlooking Narrawong, Sawpit reserve is a popular spot for free camping and a short walk to Whalers Point Lookout will reward you with sweeping views of Portland Bay. Also there is a track for the keen Mountain bikers of all levels of experience making the most of the many trails that squeeze their way through the dense foliage here.For the keen bushwalker you might happen to see native orchids, bush birds or native animals.

Narrawong’s Esplanade is a popular walking path and suitable for all fitness levels. Narrawong’s historic cemetery is home to the grave of William Dutton, Portland’s first European settler.

The lands around what became Narrawong were traversed by indigenous people of the region for thousands of years prior to the coming of Europeans. Narrawong was part of the lands of the Guditjmara, who ranged across an area from a little south of Hamilton down to the sea, across to near modern day Nelson and northwards to what we know as Casterton. The indigenous people made effective and sustainable us of the natural resources of the region. Their extensive, continued presence in this area since early times is evidenced by coastal middens, rock shelters, weapons, tools and burial places. The wildlife around Mount Clay was apparently particularly bountiful for the original inhabitants.

The European history of Narrawong and the surrounding countryside dates back to the early 1830’s. Early  settlers and whalers may have reconnoitered the locality, but Edward Henty was the first European to explore the locality and record his impressions. Henty and his party arrived at Portland Bay on 19 November 1834. His journal of 1 December 1834 he and a strong group … pulled across the bay to Second River to explore the country back. Later he referred to the river as “Duttons River” in a letter to his brother Charles. Pioneer William Dutton was amongst those who accompanied Henty on this reconnaissance. A year later, Edward Henty’s  journal refer to the river as the First River and then as it is now know the Surry River. the Henty’s made no use of the land at what became Narrawong.

In August 1836, Surveyor-General Major Thomas Mitchell made his way through the Narrawong locality. Mitchell and a substantial party of explorers had traversed what was to become Victoria, from the Murray down to the sea at the mouth of the Glenelg River and then back through what became Portland, Hamilton and the Grampians. Mitchell and some of his men reached the shores of Portland Bay, replenished their stores and took sightings of prominent landmarks the next day. Later that day, Mitchell recorded crossing a little river “which at the request of Mr. Henty, I have named the “Surry”. Later Mitchell and his men crossed the mouth of the Surry and set up camp nearby on a fine grassy knoll. The next day they caught Bream from the Surry and ascended to the highest point of the hill behind the Surrey Estuary. Mitchell named this imposing hill Mount Clay, to commemorate a fellow officer from the Peninsular Wars of the early 1800’s. Major-General John Granby Clay. Until then Mount Clay had been known as Big Hill, an appropriate descriptive name. Mount Clay was the districts name for some twenty years.

Permanent European Settlement at Narrawong took place in the early 1840’s. The first settlers are considered to have been Thomas Faro, William Millard and their families. These pioneers took up pastoral licence for 640 acres east of the Surry River mouth in July 1842. However they  had apparently been in occupation of the land for some two years before formalising the arrangement..In late 1842, Government Surveyor Edmund Kennedy and a survey party marked out a road from Portland along the coast to a ford near the mouth of the Surry , to the Fitzroy River mouth, along the coast until close to Yambuk and thence inland to Port Fairy. The first sales of land for the Mount Clay district, took place in late 1843 after Surveyor Tyres had completed his general survey. Few lots were sold as the prices were considered excessive. However John Blair, the powerful Police Magistrate, acquired two choice lots of land at Mount Clay. In 1848, pioneer William Dutton retired from the sea to take up a substantial land holding near the mouth of the Surry. From 1849 onwards, mail was carried by coach from Portland to Port Fairy via the coast road.

In 1850, Government Surveyor Lindsay Clarke commenced work in the Mount Clay area, laying put township blocks near the south of the Surry River. The future settlement was designated the “Surry River Township Reserve”. The general area continued to be known as Mount Clay. For a time, the town reserve was known as Mount Clay township. This state of affairs changed in 1855 when Government Surveyor Turner is believed to have named the township Narrawong. The name Narrawong, apparently a local Aboriginal word for long river, well describes the estuary of the Surry. The indigenous name for Narrawong was Yanuk.

The 1850’s saw considerable growth and development at Narrawong. The Victorian gold rush during this decade generated something of a boom for Portland as migrant ships delivering human and general cargoes destined for the inland or goldfields. Narrawong supplied Portland’s vastly increased population with a range of produce.An account of Narrawong in the 1850’s was recorded by James Bonwick who toured the Western District and its schools in 1857 publishing his impressions in the book,” Western Victoria- In Geography and Social Conditions”. James Bonwick, declared that ” There is not a more fertile and lovely area in Victoria”, noting that many of its settlers ere Irishmen from Ulster and that the locality had a largely Protestant population. He also observer that the district had ” a good name for general sobriety”. The fact that Narrawong had no inn or hotel at the time contributed to these sober habits. A Presbyterian Free Church denominational school was established in 1857. Thomas Donohue’s Farmers Inn opened its doors in September 1859. The site was located on what was to become the local store. Much of the original building is apparently still there. The Narrawong Post Office also opened in 1859 and was allocated the barred numeral cancel 252 which was used for over fifty years.

The 1860’s saw Narrawong continue to prosper and develop. The denominational school came under the control of the Board of Education in 1963, becoming State School 458. In time, a new school was constructed – State School 2918. A major maritime disaster took place near Narrawong on 2 August 1863, when the brig Julia was wrecked at the mouth of the Fitzroy River. Six Portland men died in this disaster. They were would be rescuers rather than victims of a ship wreck. The group had rowed a whale boat across the bay from Portland to assist with the rescue. On arriving at the wreck and seeing Captain Fawthrop and the Portland Lifeboat crew had matters in hand, they apparently made for Narrawong and the mouth of the Surry rather than contend with the long row to Portland. All perished when the whaleboat capsized in heavy seas. The inquest into the death of the six men was conducted at the Farmers Inn Narrawong. Three bodies given up by the sea were buried at a location which became the Narrawong Cemetery. The 1870’s was also an apparently stable and prosperous decade for Narrawong, with the completion of the railway link between Melbourne and Portland in 1878 positioning the district well for the future.

The 1890’s saw a number of developments in Narrawong and its district. In 1892 William Skene established a private cheese factory at his property Yannarie, located on the Narrawong – Tyrendarra  “border” on the eastern side of todays Princes Highway between Lovell’s Lane and Doyle’s lane. Yannarie Cheese was highly regarded and sold as far afield as Melbourne, to which it was shipped by steamer of train. Yannarie had considerable economic impact on the district. It also served as a community focal point, as farmers met and exchanged news and views of the day whilst they waited to deliver their milk for processing. Yannarie later turned to making butter. Between 1896 and 1897, the Farmers Inn was extensively renovated, having fallen into a state of disrepair. The establishment became known as the Narrawong Hotel. The hotel in time became Narrawong General Store. In 1897, large areas of sand drift along the coast at Narrawong were planted with marram grass imported from France. Extensive additional plantings of marrum grass were made in 1899, with the aid of a government grant.

By 1901, the year in which the Australian Colonies formed the Commonwealth of Australia, Narrawong had a population of some one hundred people, a post office, a school, a cricket club, a football club and a detachment of the H Company of the Victorian Mounted Rifles. Several members of the detachment had served in South Africa in the conflict known as the Boer War.

The Narrawong Cemetery over time.

Things To See & Do in Narrawong

The Bay of Whales Art Gallery is proud to present some of the best realistic animal and bird paintings in Australia by Brett Jarrett. 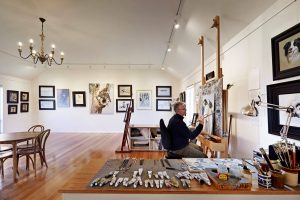 The coffee shop is open Saturdays and Sundays 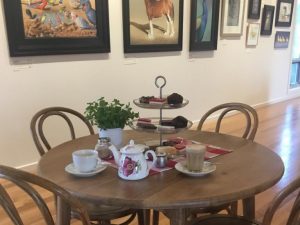