Set on 210 hectares with craggy coastal cliffs, this park is home to sea birds and the unique Soap Mallee Gum trees – a small tree that occurs nowhere else in Victoria, yet is fairly common along the coast in South Australia. Echidna’s are very common, along the track are the holes that they dig looking for ants and grubs. The park has many walking tracks including a 5 km lighthouse walk. Barbecue facilities and a picnic area are also available. The Cape Nelson scenic drive is a pleasant 24 km round-trip from Portland. At the end of the drive,the spectacular Cape Nelson Light-station stands 32 metres tall and dates back to 1883. Light-station Tours, Isabella’s café & historic accommodation. 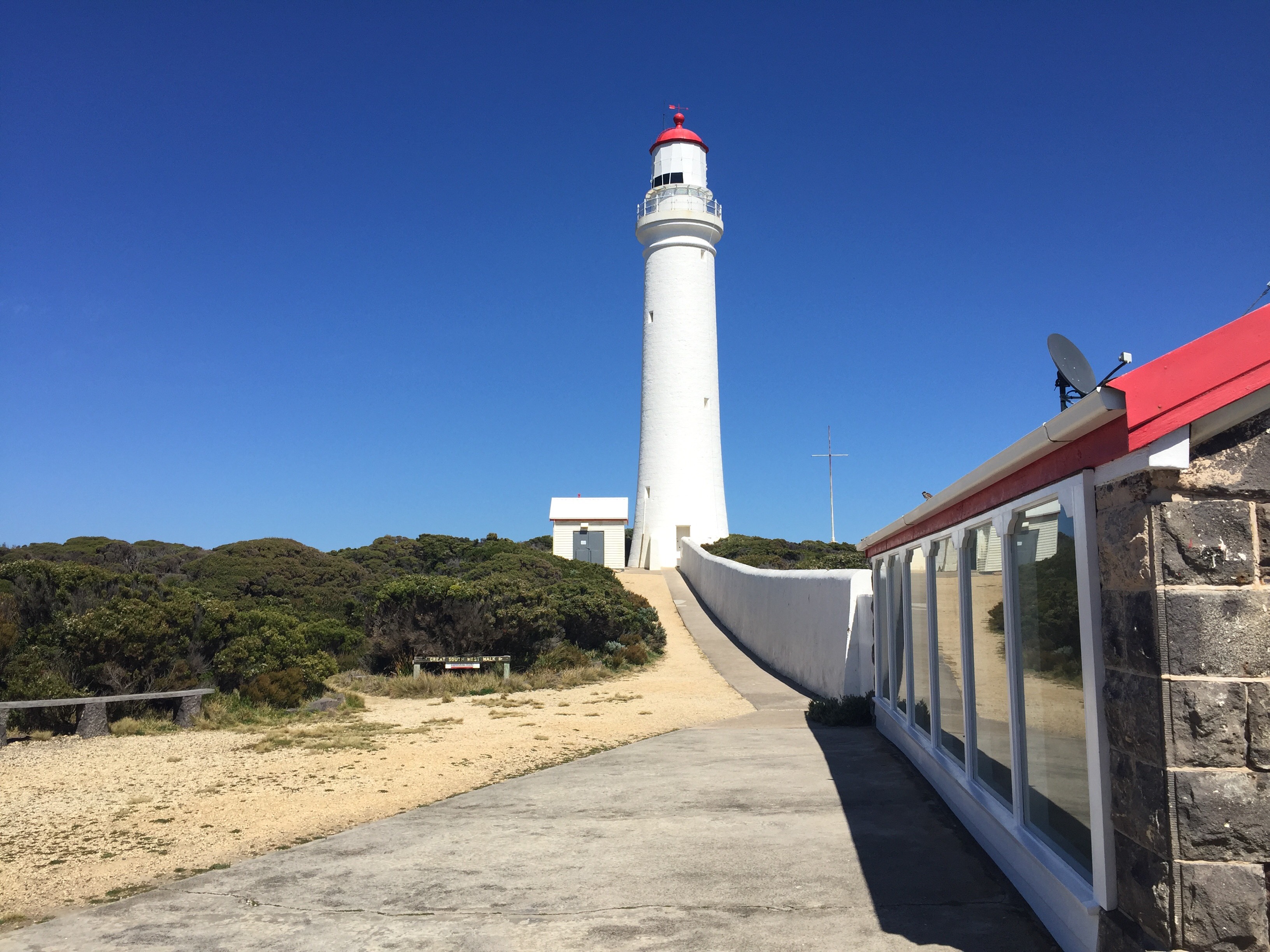 On July 7th, 1884 the light of the Cape Nelson Lighthouse was officially lit.The need for a lighthouse to the west of Portland had been apparent since the earliest years of European settlement. The state of navigation, the nature of sailing vessels and the treacherous coastline meant that vessels were in danger as they made their way to or from Adelaide to Melbourne. From time to time, there were major shipwrecks.

In 1854 a government committee recommended that lighthouses were built on a number of propionate headline along the Victorian coastline, with a major open-ocean lighthouse to be erected at Cape Bridgewater.

Portland Harbour master James Fawthrop submitted a report in 1856, asserting that “a light exhibited on Cape Nelson would be preferable”. His compelling arguments won the day and Cape Nelson became the preferred site. Governments of the day always seemed to have more pressing priorities. However maritime disasters and near misses ensured the need for a lighthouse remained pressing. The eventual construction of the lighthouse appears to have come about as a political favour! Local parliamentarian William Tytherleigh is said to have supported Peter Lalor, the hero of Eureka and later an influential politician, at a critical time.. Lalor held several ministries and became speaker of the Legislative Assembly in 1880. He is believed to have returned Tytherleigh’s favour by throwing his considerable influence and prestige behind the push to have a lighthouse constructed on Cape Nelson.The site was surveyed in 1879 and tenders let in 1882 for the construction of the lighthouse and two cottages. A memorial stone was laid at Cape Nelson on Thursday , 19th April 1883 by the mayor of the Borough of Portland , James Trangmar.  Despite various problems, work proceeded at a satisfactory rate and the light was officially lit on July 7th 1884 30 years after the idea of a lighthouse west of Portland had first been advocated. Mayor P. W. Shevill lit the white light, whilst former Mayor W. T. Pile lit the red light. In late 1884, a telephone line was installed between the lighthouse and government offices in Portland. The telegraph system meant that messages or warnings from the lighthouse could then be rapidly transmitted to the colonial capitol of Melbourne.In 1901, the Australian colonies federated to form the Commonwealth of Australia.

Cape Nelson Lighthouse became a key part of a network of lighthouses guiding shipping safely around the continent. The lighthouse’s powerful telescope and telephone enabled it to play a strategic role during World War 1, although no German raiders were sighted.Cape Nelson Lighthouse also played a part in World War II, when a radar station and support camp was established there to provide early warning of Japanese warships and ship- launched aircraft. The installation included lookouts, an air raid shelter, quarters and a gun emplacement. The radar station was apparently linked to the Air Force base at Mount Gambier, which operated between 1941 and 1946.

The radar station also protected Portland’s Port. Redevelopment of Portland’s Port in the 1950’s and 1960’s underlined the importance of the Cape Nelson Lighthouse in protecting shipping through the region.

In 1987, the light was connected to mains power and in the 1990’s the lighthouse was” de-manned” or automated, ending an era of lighthouse keepers dating back to 1884.

Be that as it may the Cape Nelson Lighthouse continues to perform its vital role in keeping our regional seas safe. Operated by the Australian Maritime Safety Authority, its white group light flashing four times every twenty seconds can be seen some 21 nautical miles out to sea. 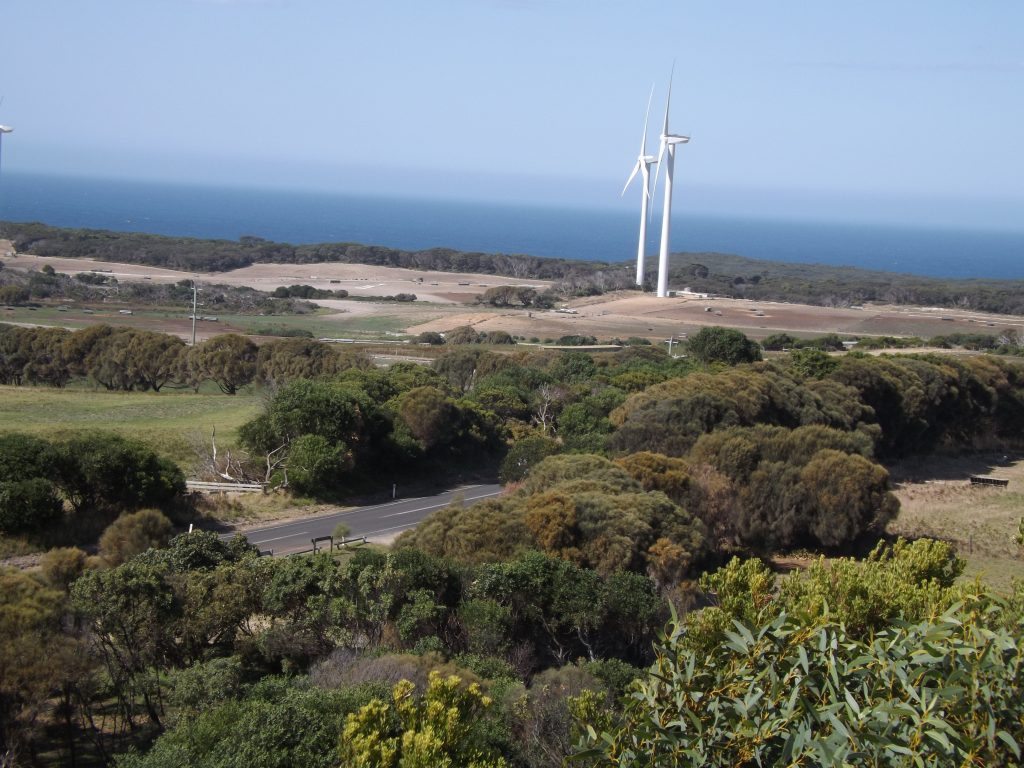 The Seacliff Nature Walk was constructed in 1979 by students, staff and parents of Portland High School and was a forerunner to the much longer Great South West Walk (GSWW) project. “From little things, big things grow.” This gentle 3km loop walk begins at the car park adjacent to the Cape Nelson Road and Scenic Drive. It encompasses coastal scrub, cliff tops and views out to the Southern Ocean 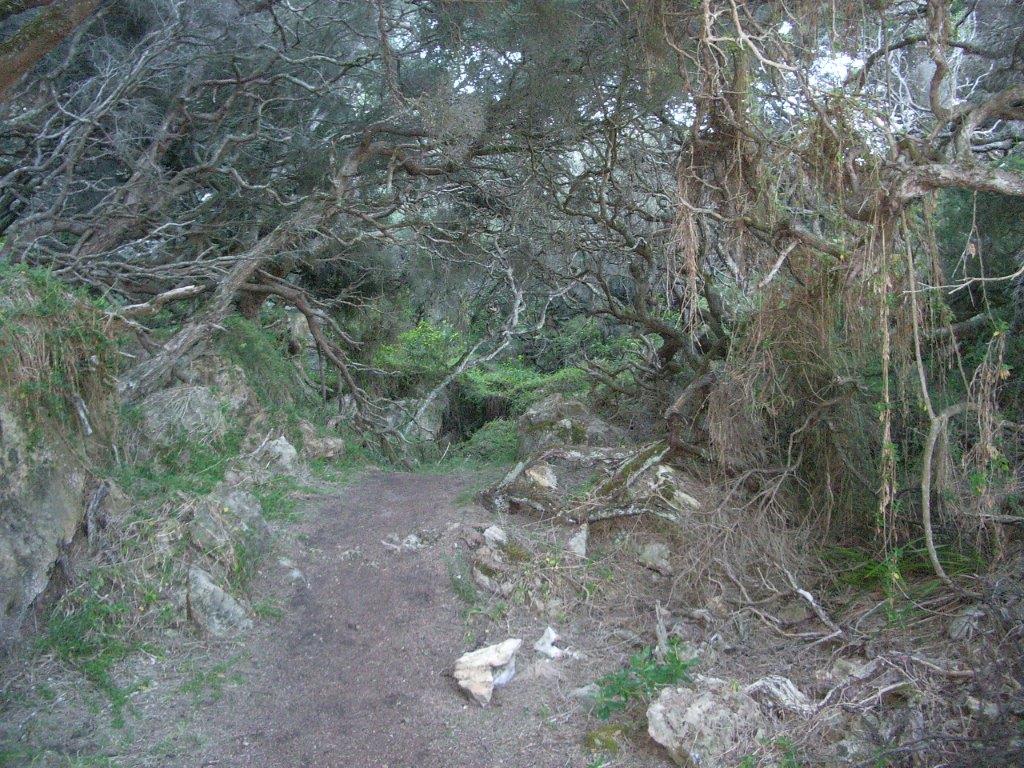 Dense, almost tropical vegetation creates a unique and enchanting canopy of Moonah Trees, with the 45 minute round trip walk through the canopy leading to lookouts to view the ocean and spectacular cliff formations. Gnarled, knotted trees cling here for their existence, and their interlocking branches form a tunnel over the path. Creepers hang from above and vines of Bower Spinach decorate the limestone boulders. Sedges grow where water trickles from the cliff face. Listen for the sea birds, magpies and black cockatoos. Look for the wildflowers and the amazing native vegetation that changes as you descend into the forest. Enjoy the peace with just the sound of the timeless sea on the rocks below, and enjoy the dramatic views along the coast from several advantage points. The Enchanted Forest contains a variety of GSWW engineering. Volunteers have built steps, stairways, bridges, ramps and lookouts to help you to navigate your way through the giant limestone boulders without damaging the magic of the forest. During summer you may spot a Southern Right Whale or two. Not suitable for prams or wheelchairs. 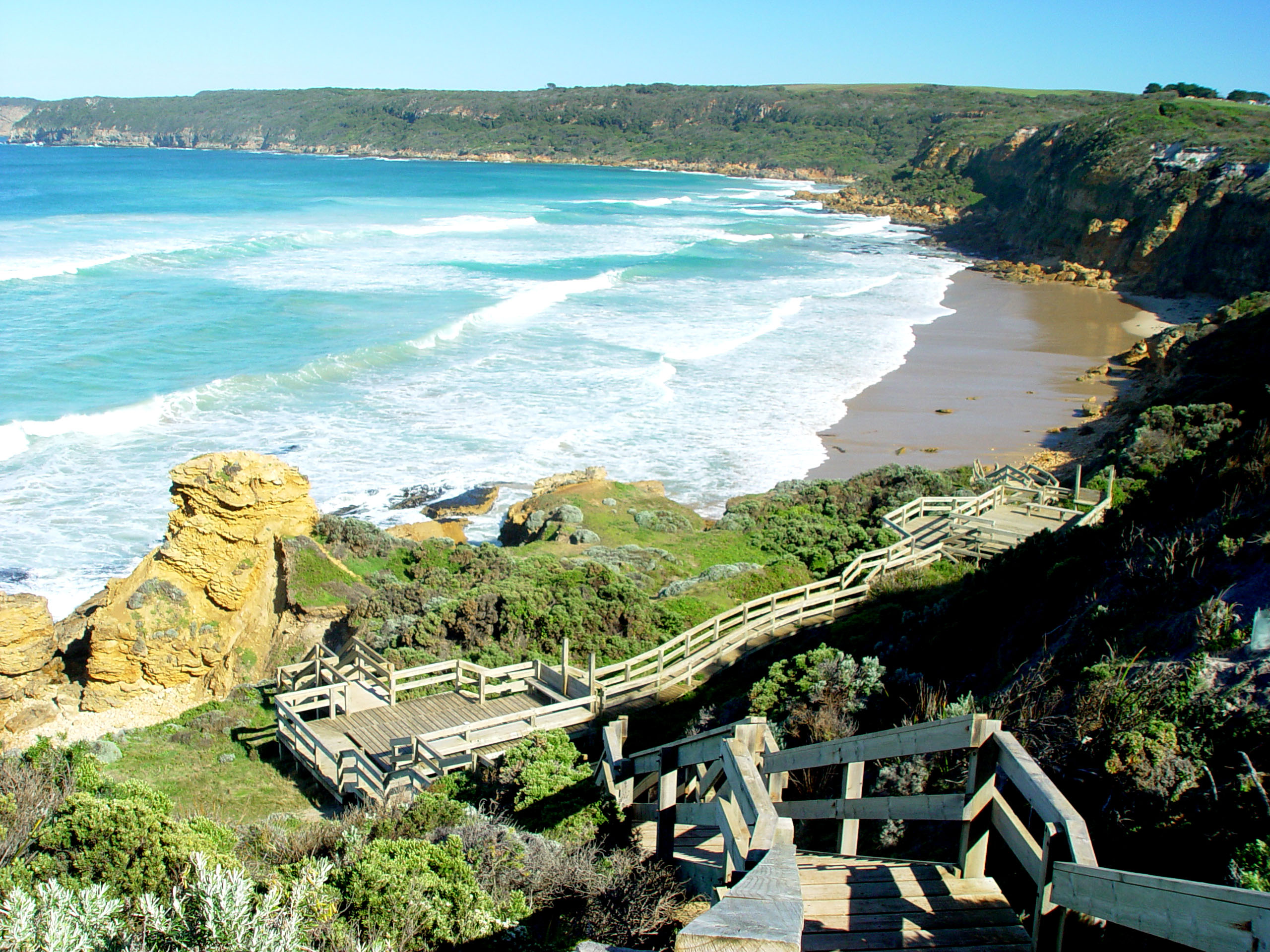 Yellow Rock is a popular surfing spot for the experienced surfer and a painting subject for local artists. Boardwalks and platforms make this area accessible for prams and wheelchairs, with a staircase leading to the beach. It is only a 10 minute return walk from the car park. 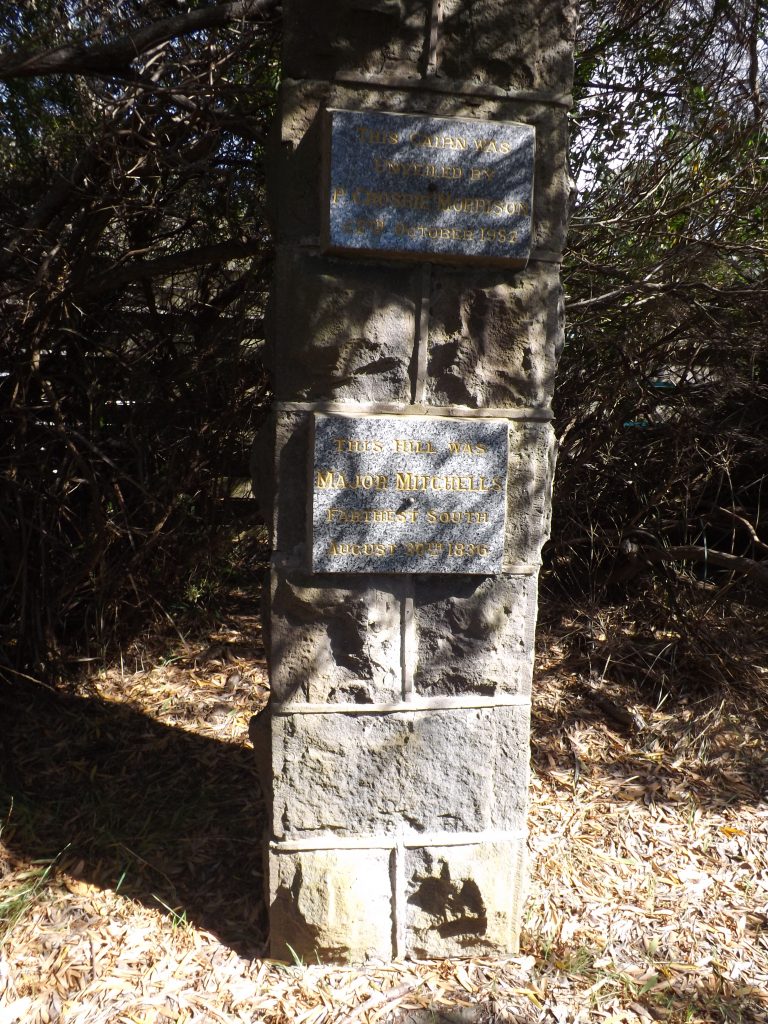 A stone column was unveiled in 1952 to commemorate the journey to the Cape by Major Mitchell and Edward and Frank Henty in 1836. This marker is located just off the Portland Cape Nelson Road at Picnic Hill Memorial.