In addition to providing an essential service, the South Portland Cemetery also communicates much about our culture and history.

As well as performing a vital function cemeteries also tell us much about the past. They contain a wealth of historical, architectural, social and botanical information.

The Portland Bay Settlement did not have an official cemetery in it’s early days. Surprisingly no provision had been made by C.J. Tyres during his 1839 survey for a cemetery within the settlement boundaries.

Nevertheless, the need for a designated cemetery soon became apparent. Burial arrangements during those early  pioneering days were rather haphazard. The dead, it would seem, were buried in the bush, upon the beach or in makeshift cemeteries.

Public pressure eventually resulted in the establishment of a cemetery to the north of the settlement in 1844. The North Portland  or the Old Portland Cemetery. This cemetery adequately served the settlement for over two decades. 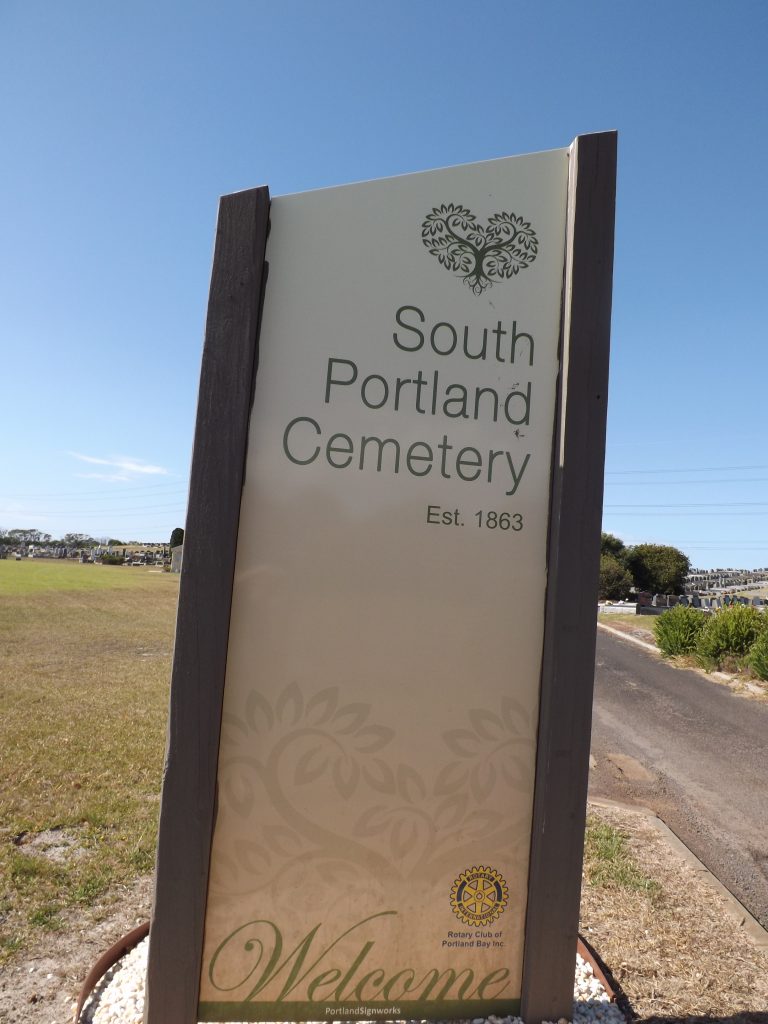 Need for a new Cemetery

By 1860, the population of Portland had grown to around 2800 people and the need for additional and larger cemetery was clear. The three hectare site at north Portland would not be adequate for the future needs of the settlement. Parts of the North Portland Cemetery were unsuitable for burials due to their rocky nature or tendency to remain waterlogged for extended periods of time. Many burials had taken place at this cemetery and suitable ground was limited.

Meetings were held and representations made. Out of these came an Order-in-Council dated 12th August 1861, providing twenty acres or some nine hectares of land for a cemetery to the south of the settlement.

Portland now had its second official cemetery, “The South Portland or New Cemetery” A public meeting held on the 24th September 1861 appointed twelve trustees to the operations of the cemetery.

The New Cemetery was duly surveyed and laid out by the region’s Government Surveyor, Lindsay Clarke. The design chosen by Clarke made good use of the sloping site.

Whilst the old Portland Cemetery was organised in traditional rectangular grids, Clarke laid out the South Portland Cemetery in a very contemporary curvilinear pattern- a layout based on curved lines. As was the tradition at the time, Clarke provided sections for all the large religious denominations in accordance with the recent census returns. Provisions was also made for smaller Religious groups and those of “independent persuasion”. 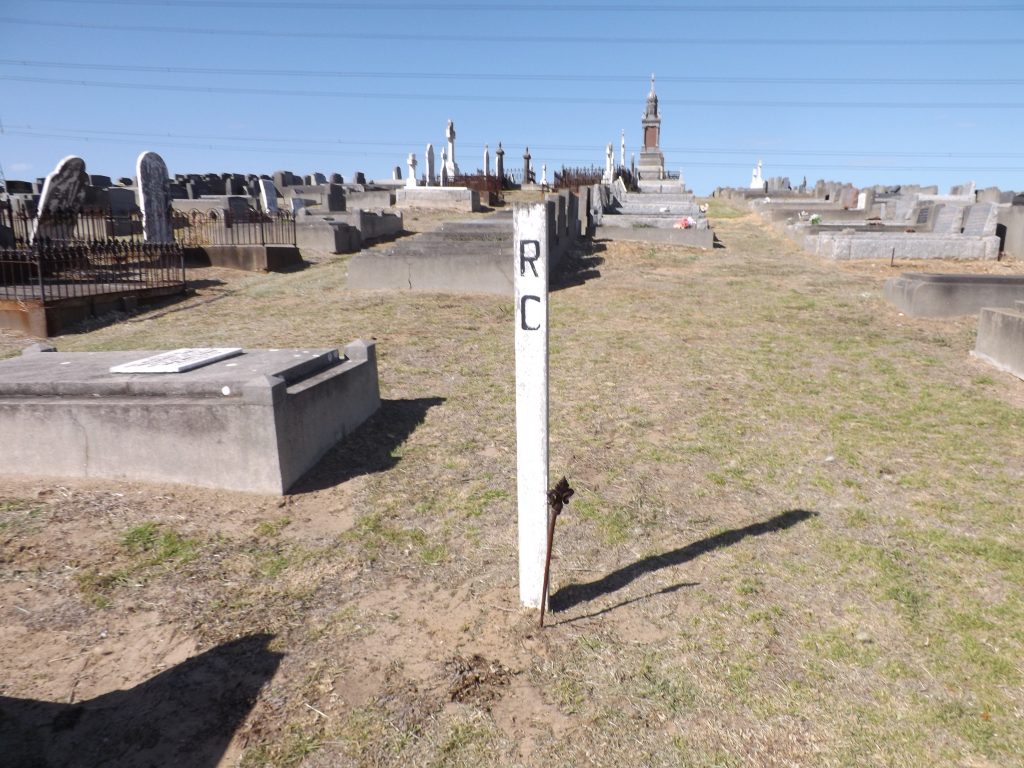 In time his curvilinear layout appears to have been abandoned, with the new sections being organised in traditional rectangular grids. Nevertheless, the oldest parts of the cemetery consist of curving paths arcing  way from the entrance and creating a pleasing, varied appearance whilst preserving the denominational distinctions of the time.

Adequate reserves existed on all sides for the planting of appropriate trees and shrubs. Clarke, who later became a trustee, died in 1891 and was appropriately interred in the South Portland Cemetery

Baron Ferdinand Von Mueller, the Government Botanist and Director of the Royal Botanic Gardens, advised many Victorian Cemeteries, including Portland on plantings. He generally recommended evergreens, particularly pines. Von Mueller supplied the South Portland Cemetery with various seedlings and seeds in the 1860’s.

The first recorded burial at the South Portland Cemetery appears to have been that of Ann Sophia Curtis on 26th December 1863.

Although burials continued at the North Portland Cemetery,both Portland cemeteries came under the control of a common group of trustee in 1867, the trustees imposed uniform conditions on both cemeteries and actual burial registers were commenced in 1867.

Some of Portland’s most influential citizens acted as cemetery trustees in the early years. Their ranks included Thomas Must, James Trangmar, James Fawthrop, Edward Henty, James Schofield and John Hogan.

The first Trust Secretary is believed to have been Edward Hughes, a journalist, who was also a trustee. The first official sexton or caretaker appears to have been Alfred Dimond, who performed the role from 1867 to 1903.

No more interments were to be allowed except for those already having relatives buried there. These arrangements were formalised by an Order-on-Council of July 31st 1882. The task of running the South Portland Cemetery was less onerous.

On 11th December 1905, Portland’s first cremation is believed to have taken place at the South  Cemetery. The body of Sikh Hawker Bucksie Singh, apparently killed by a tree fall, was cremeted on a funeral pyre under the supervision of the Portland Police.

In 1910 provision appears to have been made to extend the cemetery by way of an Order-in-Council published in the Government Gazette. Land nearby the cemetery was reserved from sale. This reservation was extended in 1917.

In the 1980’s the very old plantings of Cypress Pines along the Cape Nelson Road boundary were removed to make way for a lawn cemetery space.

As befits a cemetery that has been in service for some one hundred and fifty years, there are many intriguing, evocative and imposing Victorian, Edwardian and modern memorials to be found in this cemetery.

Diverse materials have been used and a fine array of witty, informative, intriguing and poignant epitaphs abound.

Because Portland’s second official operating cemetery and because it is an operating cemetery, the significance of the South Portland Cemetery is often underestimated. It should be remembered that many of Portland’s leading citizens and personalities over time are buried in this cemetery. A meander through the older sections of the South Portland Cemetery is akin to perusing a history of Victoria’s First Settlement.

We should remember that this cemetery commenced operations back in 1863 and is an important part of the history of Portland and Victoria. 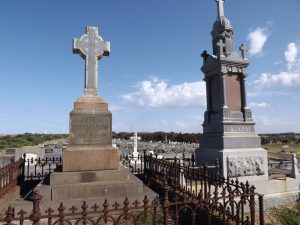