Established in 1842 the Portland Guardian  eventually merged with the Observer in 1890 dropping the ” Guardian” banner to become the Portland Observer.

The paper is published on Tuesdays and Fridays. 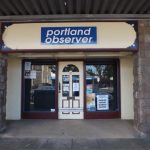